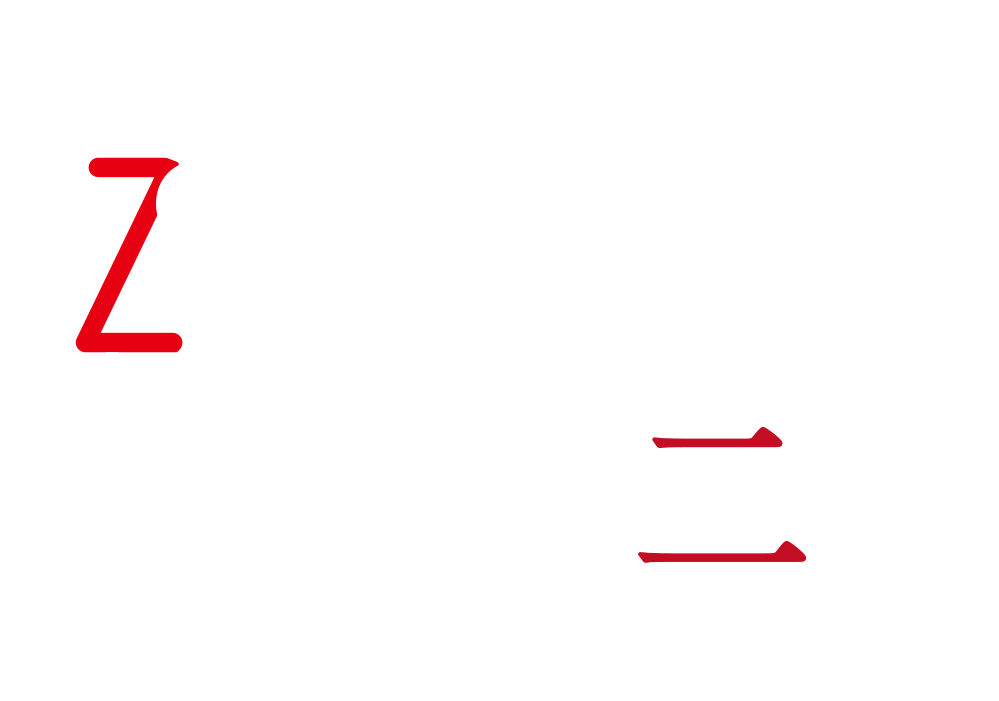 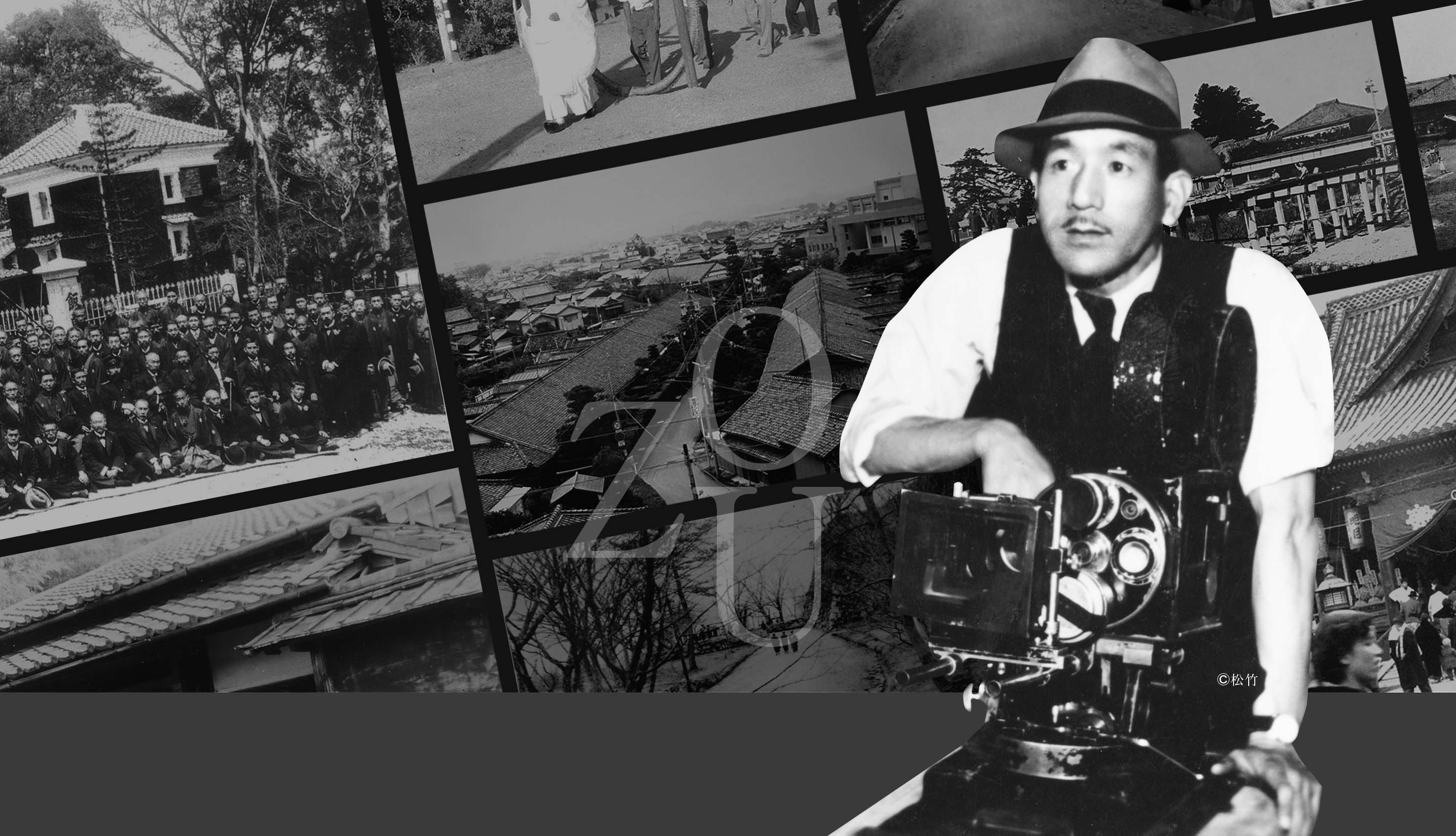 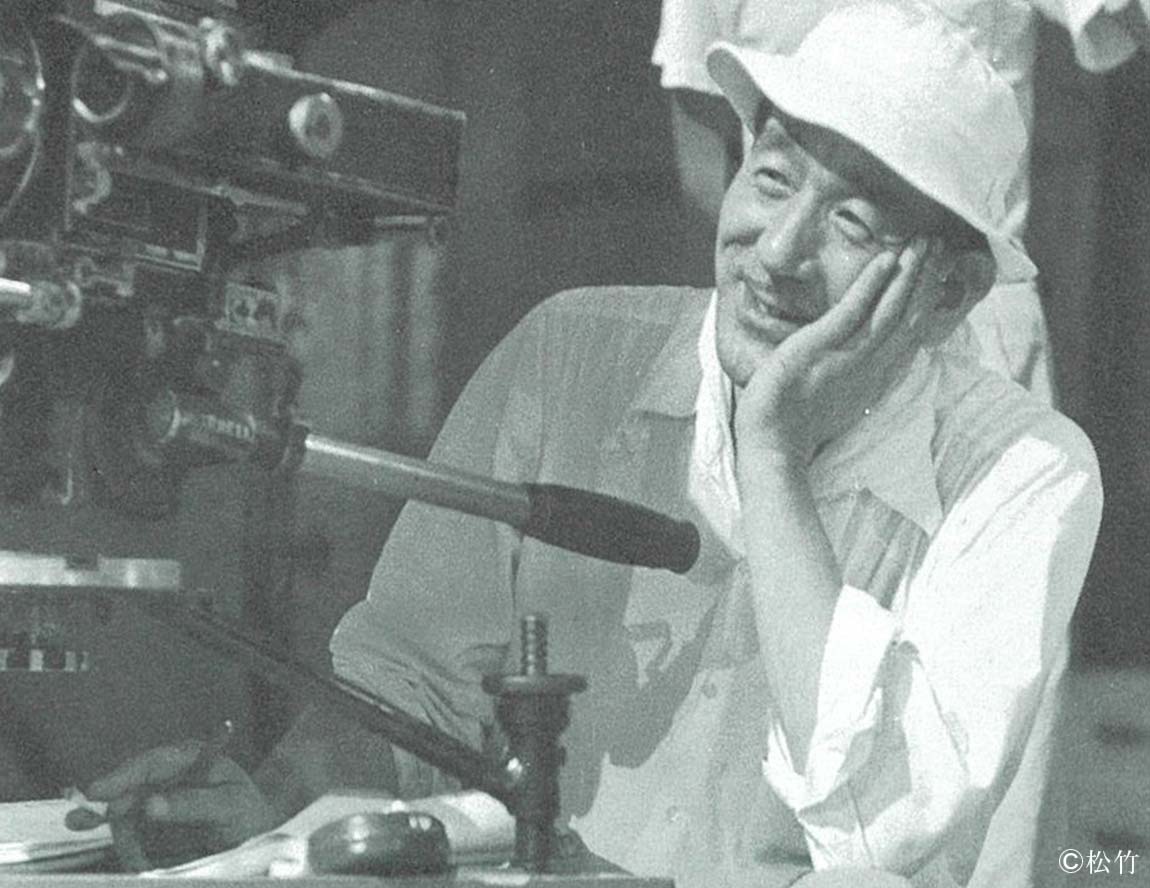 Ozu Yasujiro is a Japanese movie director and screenwriter. He is famous not only in Japan but also all over the world.

He created masterpieces such as “Late Spring”, “Early Summer” and “Tokyo Story”. He depicted the subtle of parent-child relationships and life on the stage of a middle-class family, using a unique low-angle method. So-called “Ozu-style” has had a strong influence on movie directors around the world.In 1903, Yasujiro was born in the Fukagawa district of Tokyo (Now: Fukagawa, Koto ward, Tokyo). In 1913, he moved to his father’s hometown of Kanbe village, Iinan district of Matsusaka in Mie Prefecture, where he spent his adolescence. Ozu Yasujiro Memorial Museum of Matsusaka has various materials about him. Why don’t you visit it and get in touch with the history and memories of him? 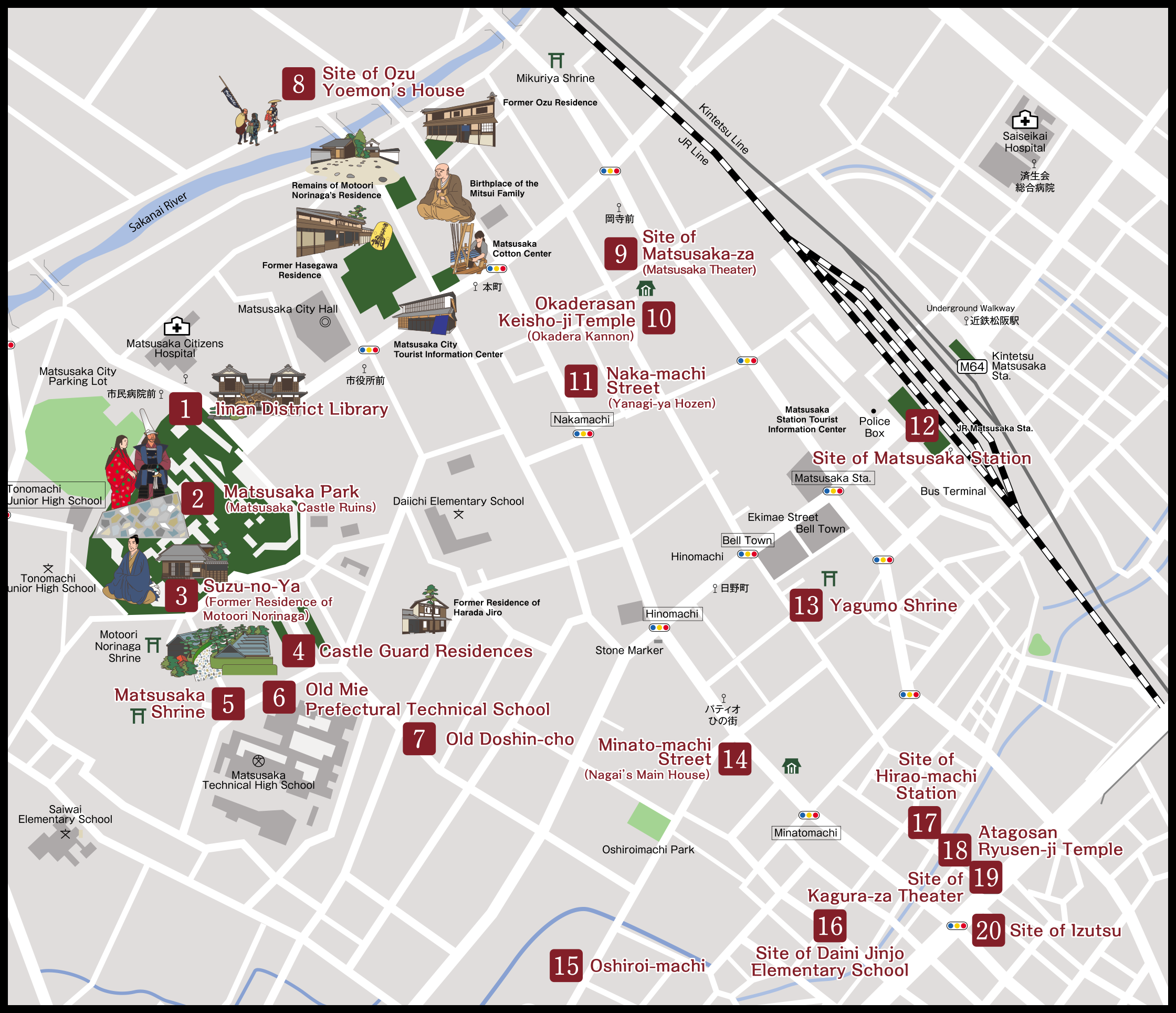 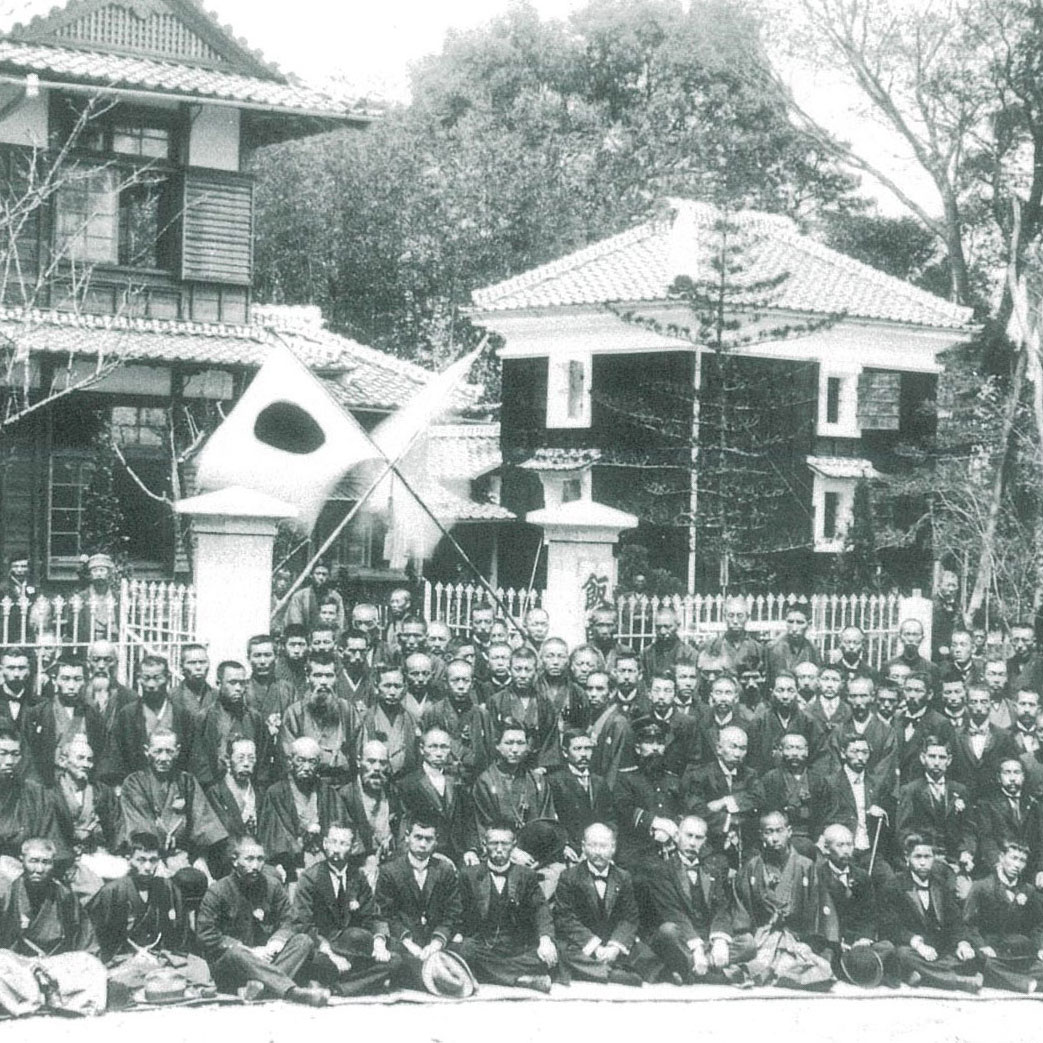 In 1910, Iinan District Library was built in memory of the crown princeʼs (later became the Emperor Taisho) visit to Matsusaka Park. In 1918, Yasujiro wrote in his diary “I went to the park with my friend Inui and took a nap there.” This is a place unique to Matsusaka because you can imagine how he (who later became a worldwide movie director) was taking a nap in this library. Currently the second floor of the museum is the “Ozu Yasujiro Memorial Museum of Matsusaka”. There are various exhibits showing Yasujiro's life in Matsusaka. 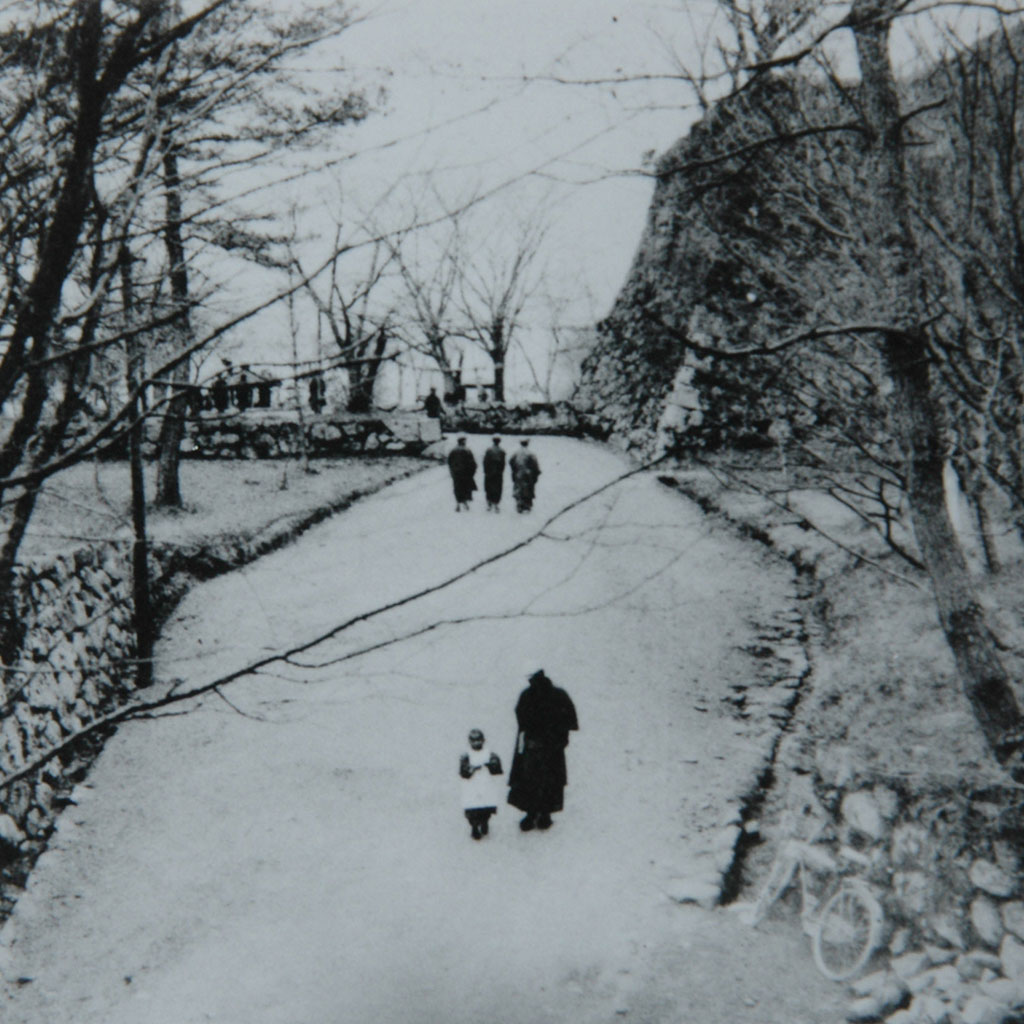 In 1881, “Matsusaka Park” opened in the ruins of Matsusaka Castle, which was built by the warlord Gamo Ujisato over 400 years ago. In those days, it had a small zoo for monkeys and bears, play equipment for children and a restaurant inn. It must have been Yasujiroʼs childhood playground because he sometimes mentioned cherry and plum blossoms, wisteria trellis, and playing on a swing in his diaries from 1918 to 1921. 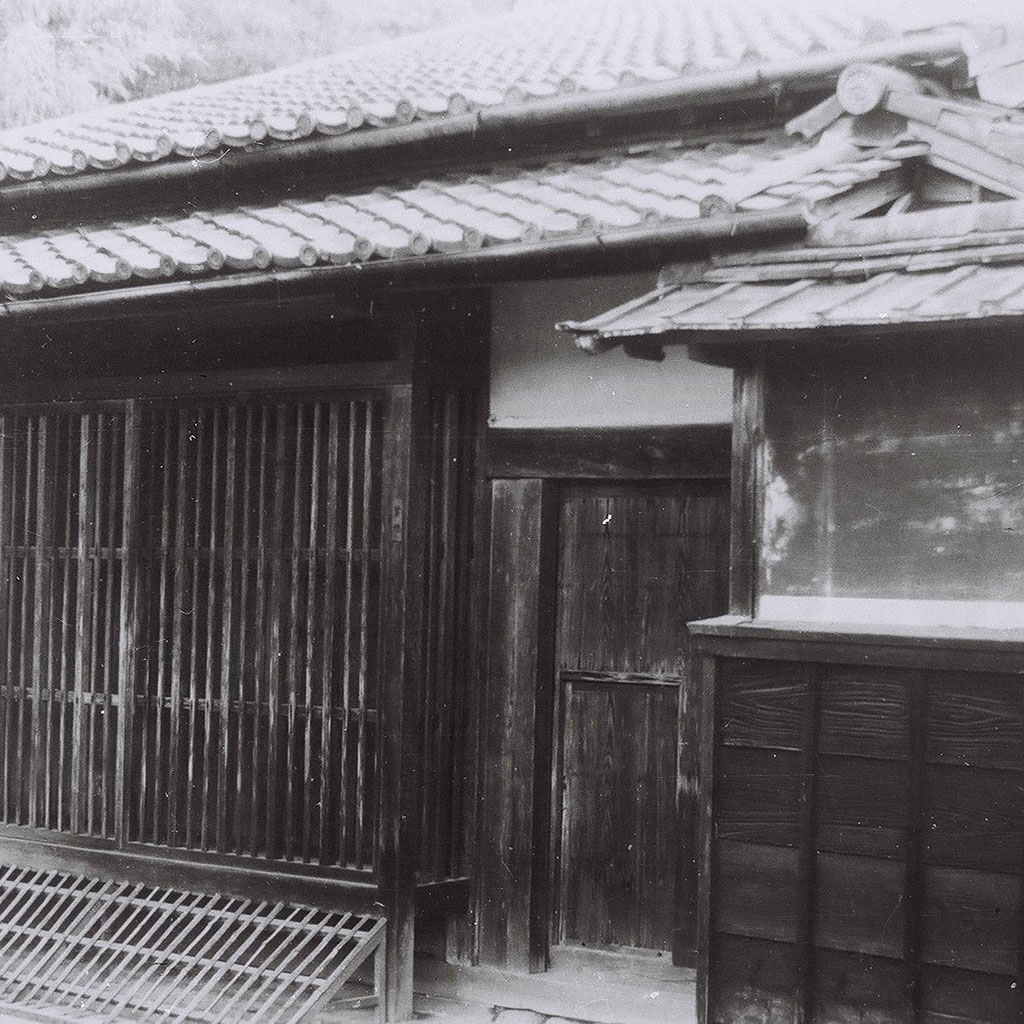 The scholar of ancient Japanese literature and culture Motoori Norinaga lived in this house for about 60 years. Later it was moved to Matsusaka Castle Ruins. His study on the second floor is called “Suzu-no-Ya”. Yasujiro wrote in his diary in 1918, “During the spring vacation, I go to the park with my friends every day and play on the lawn of Suzu-no-Ya.” He also wrote when he was in a dormitory, “I saw the ruins of Mr. Motoori on Sunday. Including the park, this area must have been his playground as well as the place for learning.” 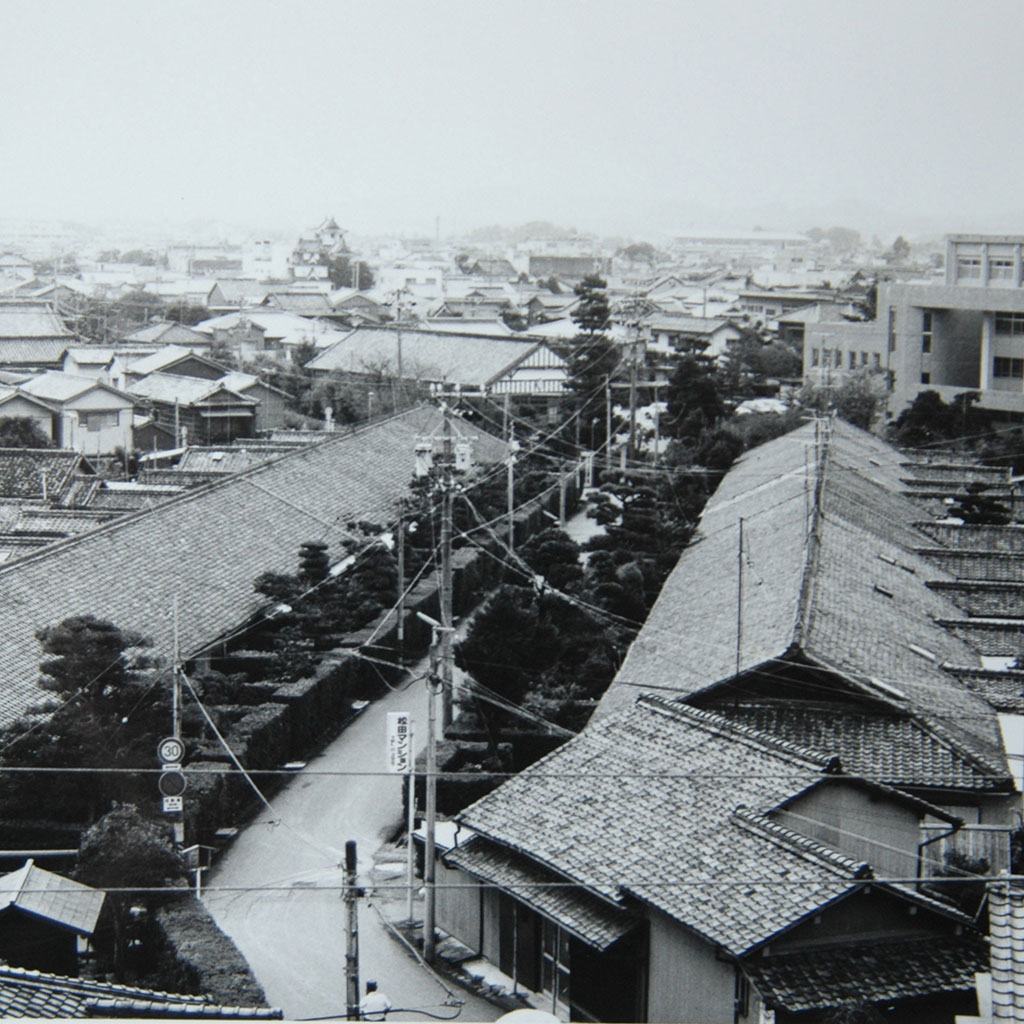 These are the houses where 20 samurai officials of the Kishu Domain and their families lived. They were in charge of guarding Matsusaka Castle at the end of the Edo period. Their descendants still live there and maintain podocarp hedges, which form a splendid landscape. As a movie director, Yasujiro said, “I want to shoot a movie here...” This place must have looked really impressive to him, who was fond of running around the area. 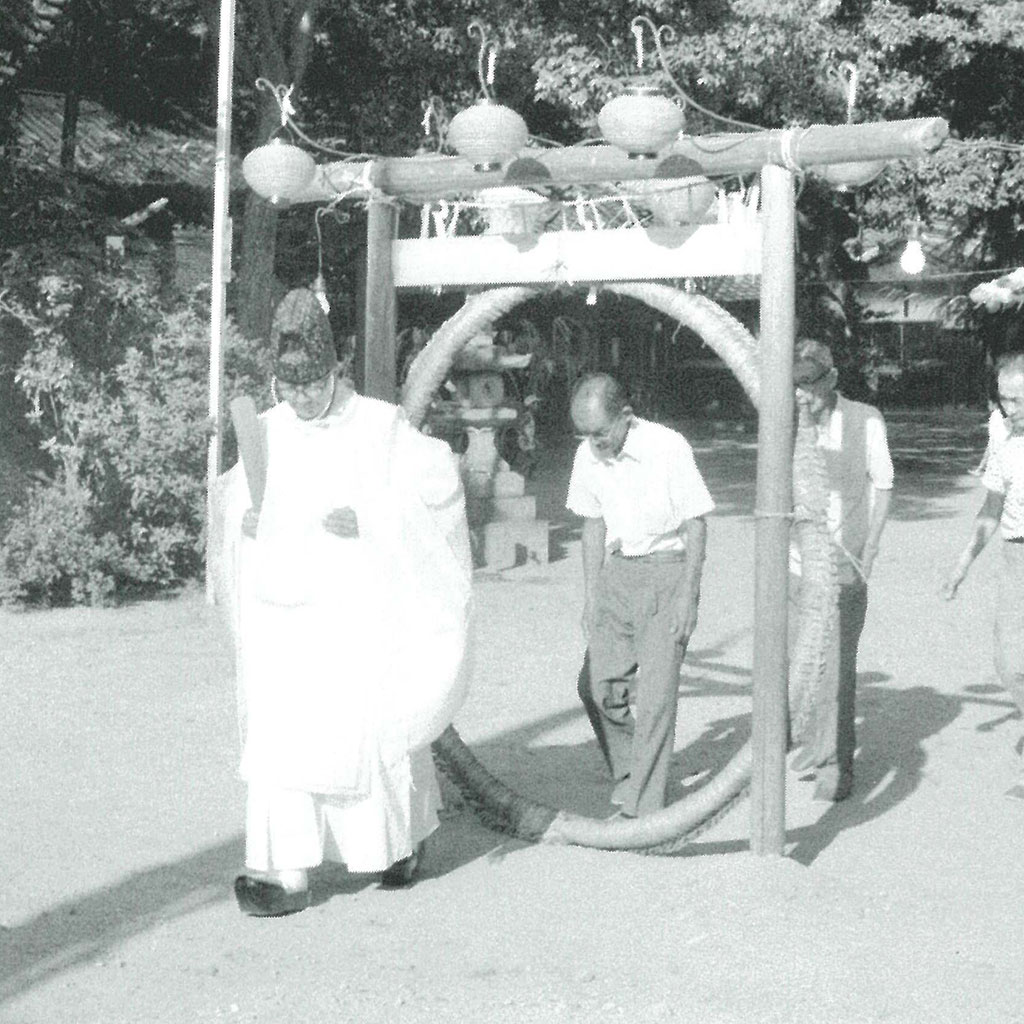 This is a shrine which was newly built in Yoiho-no Mori Wood. It was designated as the guardian shrine of Matsusaka Castle. Yasujiro wrote in his diary that he often visited it when he went to Matsusaka Park. According to his diary on July 25, 1918, he went to the festival of Matsusaka Shrine with his friend, Mr. Inui. By that time, he must have already been familiar with the customs of Matsusaka. 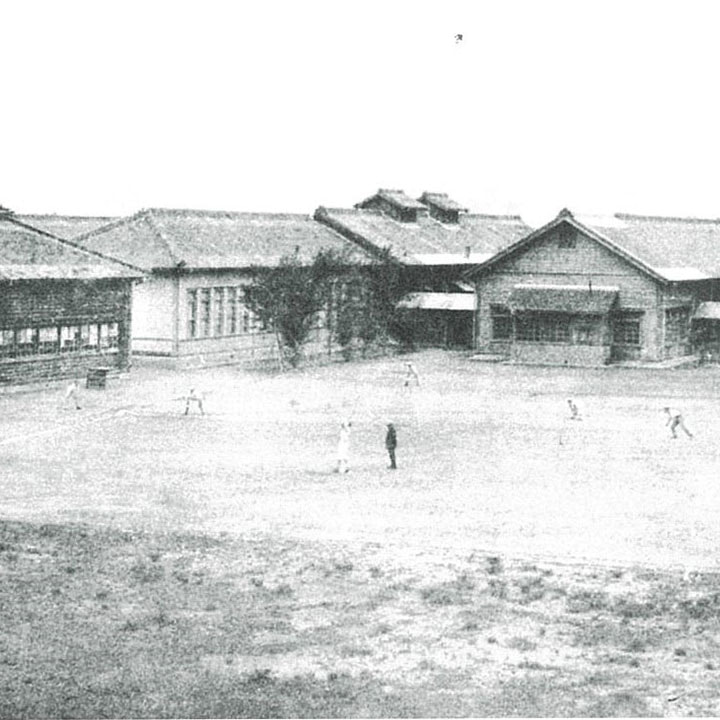 It was founded as the first secondary educational institution in Matsusaka and the only school offering a major in applied chemistry in Japan, it was built in 1902. Yasujiro frequently wrote about playing baseball in his diaries in April and May of 1918. In his diary on August 23, “I went to the technical school with my friend Inui and watched baseball.” And on the following day, “I watched technical school students playing baseball. They didn’t play well.” He sometimes criticized the players after participating in or watching baseball games, but he must have been a big baseball fan. 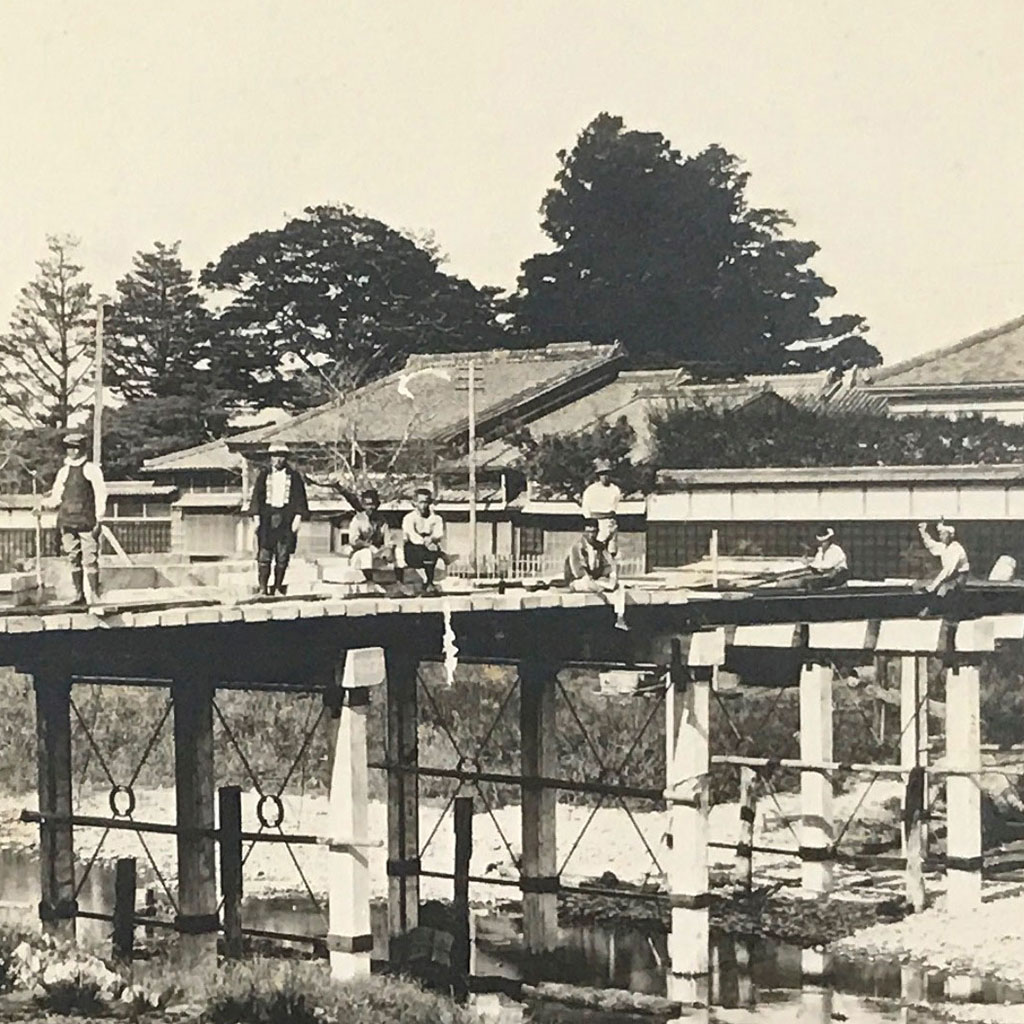 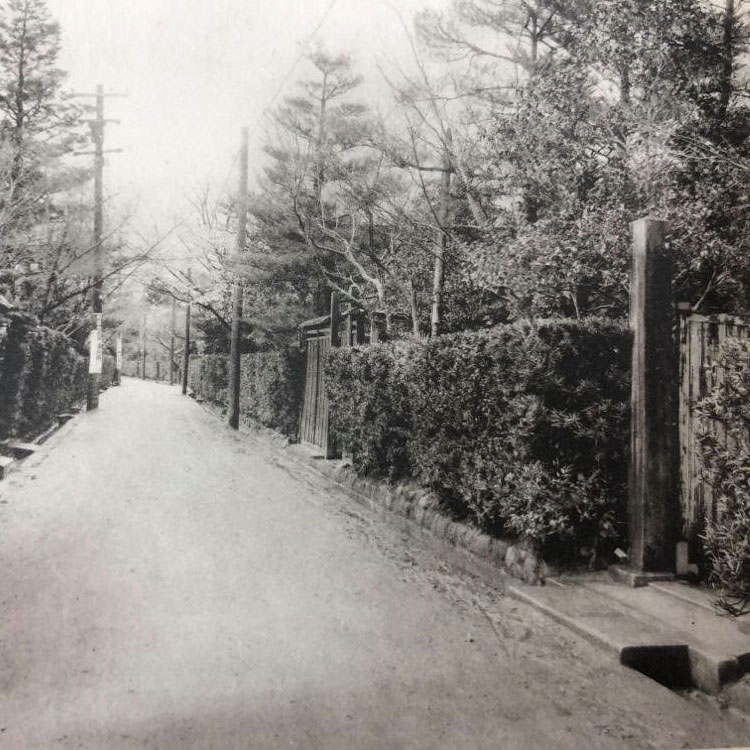 This is the place where the samurai officials called “Doshin” lived. It is a quiet place with beautifully trimmed hedges. There are still some houses from that time. According to his diary, he often played around Matsusaka Castle 2 and Oshiroi-machi Street 15. Perhaps you can imagine how Yasujiro was running around this street. 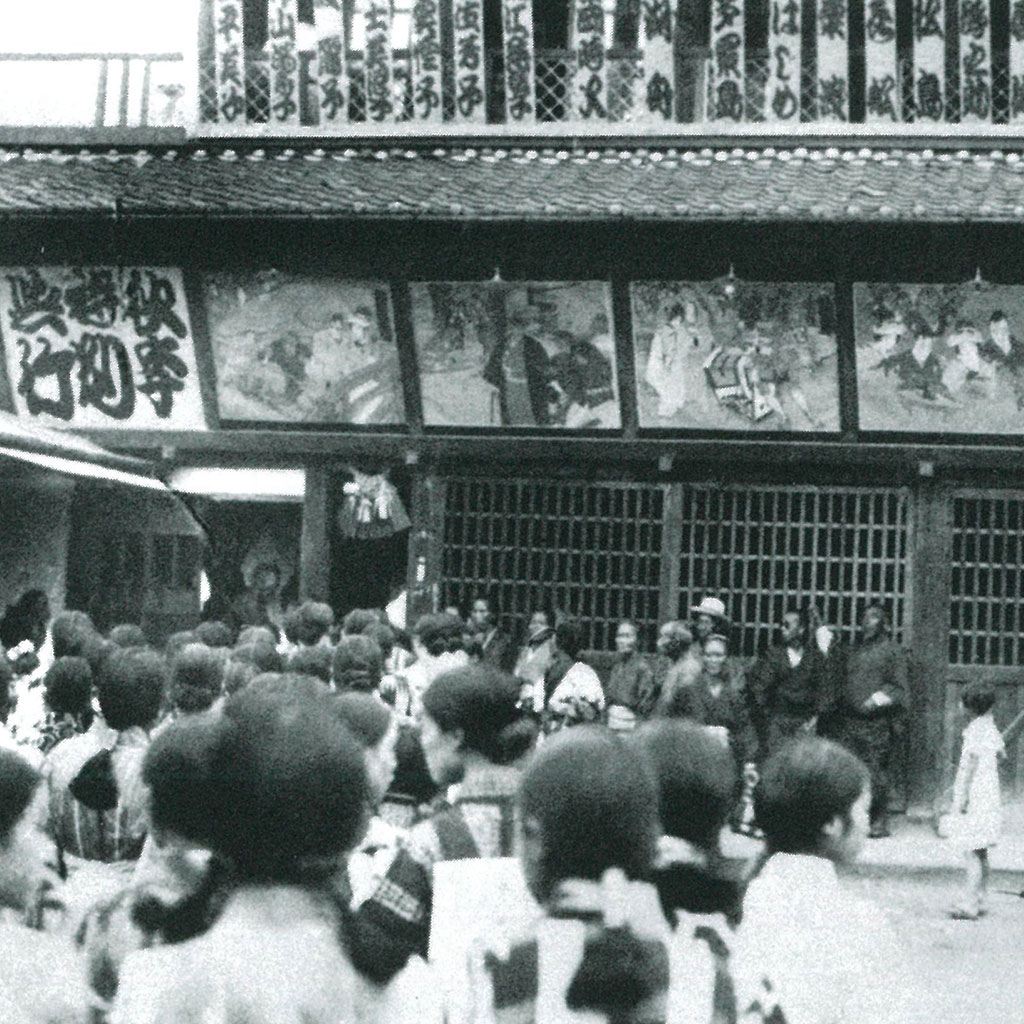 “Matsusaka-Za” is the successor of “Matsusaka Performance Theater” in the Edo period (1603-1868). As well as “Kagura-Za 19” in Atagomachi, it was one of the theaters representing Matsusaka. At that time, some of the first-class actors of the period came to perform in this theater. Yasujiro watched a lot of movies in Matsusaka. He wrote in his diary of 1921, “I went to the theater to watch Helen Keller, the movie recommended by the Ministry of Education, with my sister Toku, along with my friends Inui and Ohashi.” 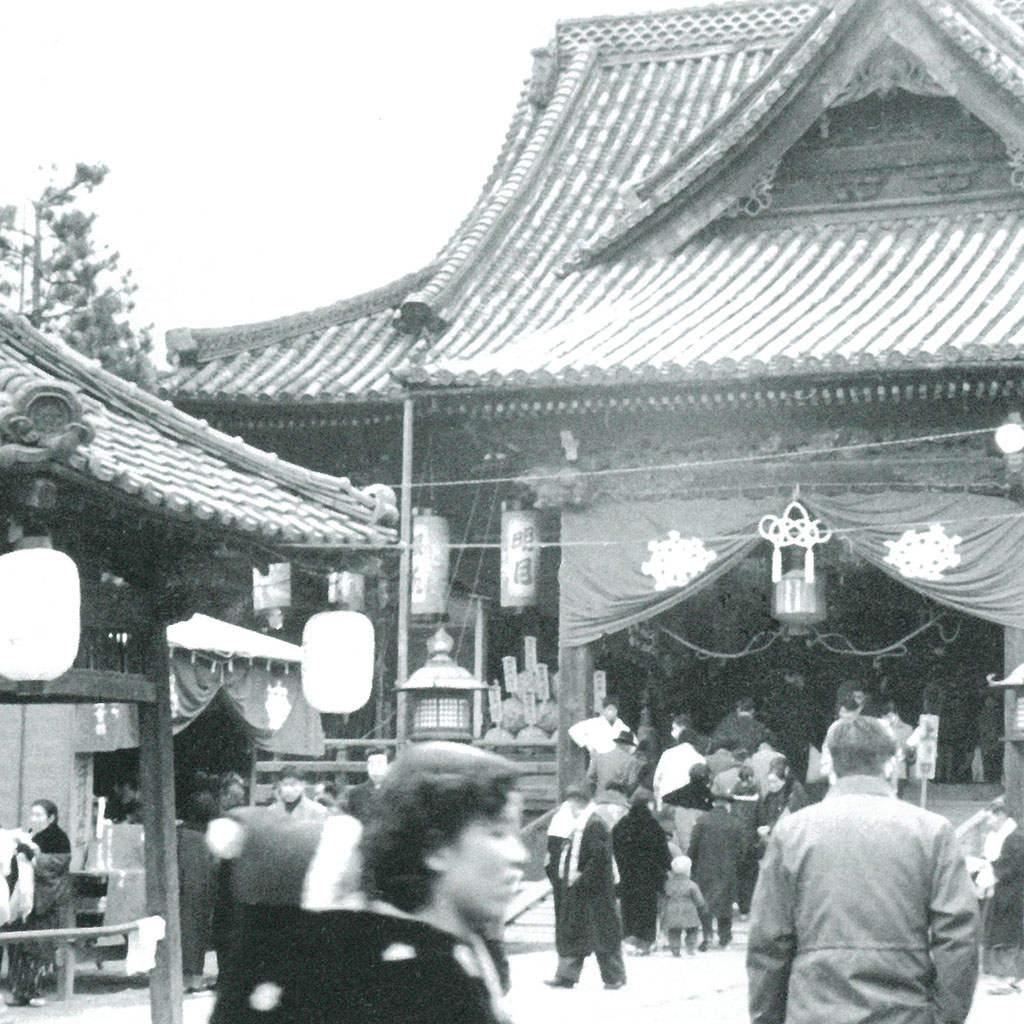 It is the oldest Kannon for getting rid of bad luck, established in the Nara period (710-784). It is affectionately called “Okadera-san”. Many people visit this temple on Hatsu-uma (the first horse day) in February (of the lunar calendar). He didn’t write in his diary that he visited temple, but wrote that his friend went around this temple to buy mulberry seedlings. Since this temple was close to “Matsusaka-Za 9”, he must have been familiar with it. 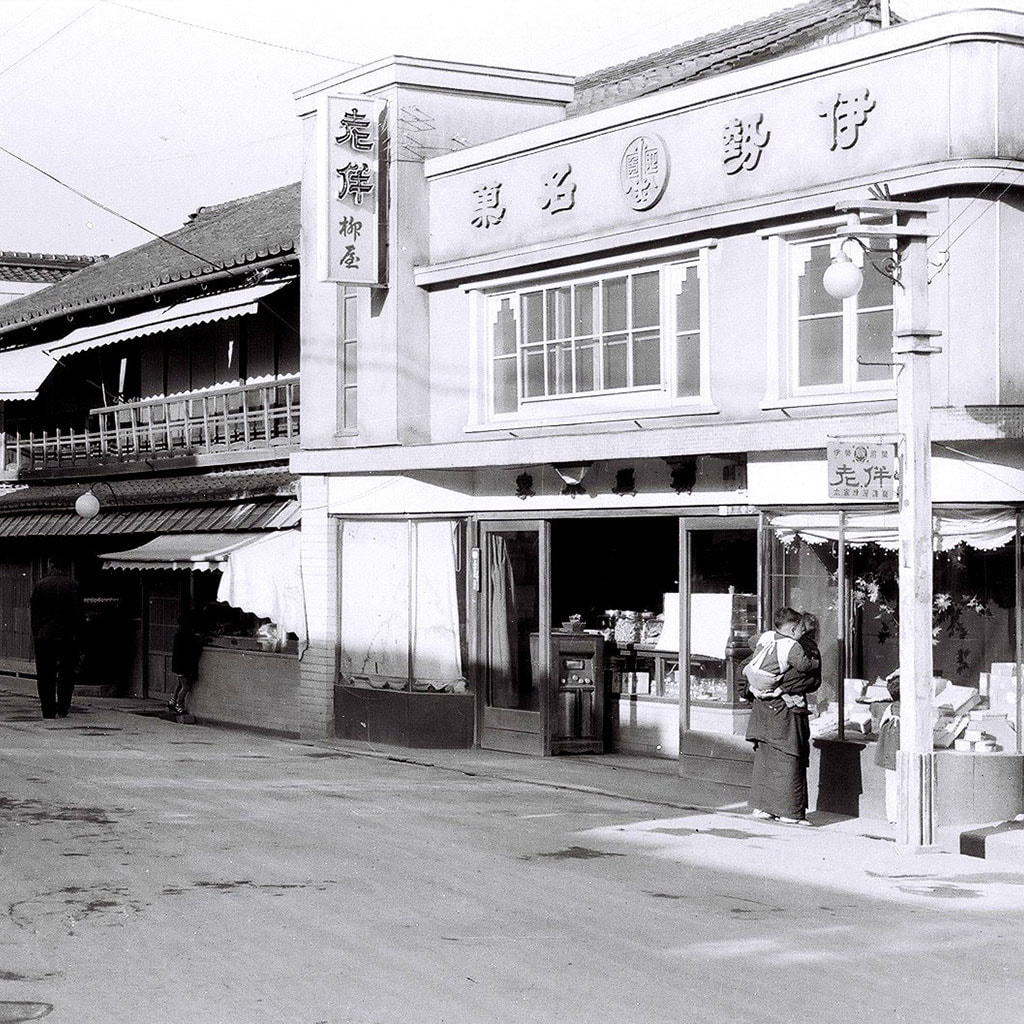 Yanagi-ya Hozen is a long-established confectionery store that was opened over 400 years ago. There is a receipt given to the Ozu family when they bought sweets in 1916. Yasujiro wrote in his diary in 1918, “...I went to Yanagi-ya with my brother and ordered three boxes of Oinotomo, said good-bye to him and went to the park...” At that time he often wrote about sweets. Perhaps Oinotomo was one of his favorite sweets. 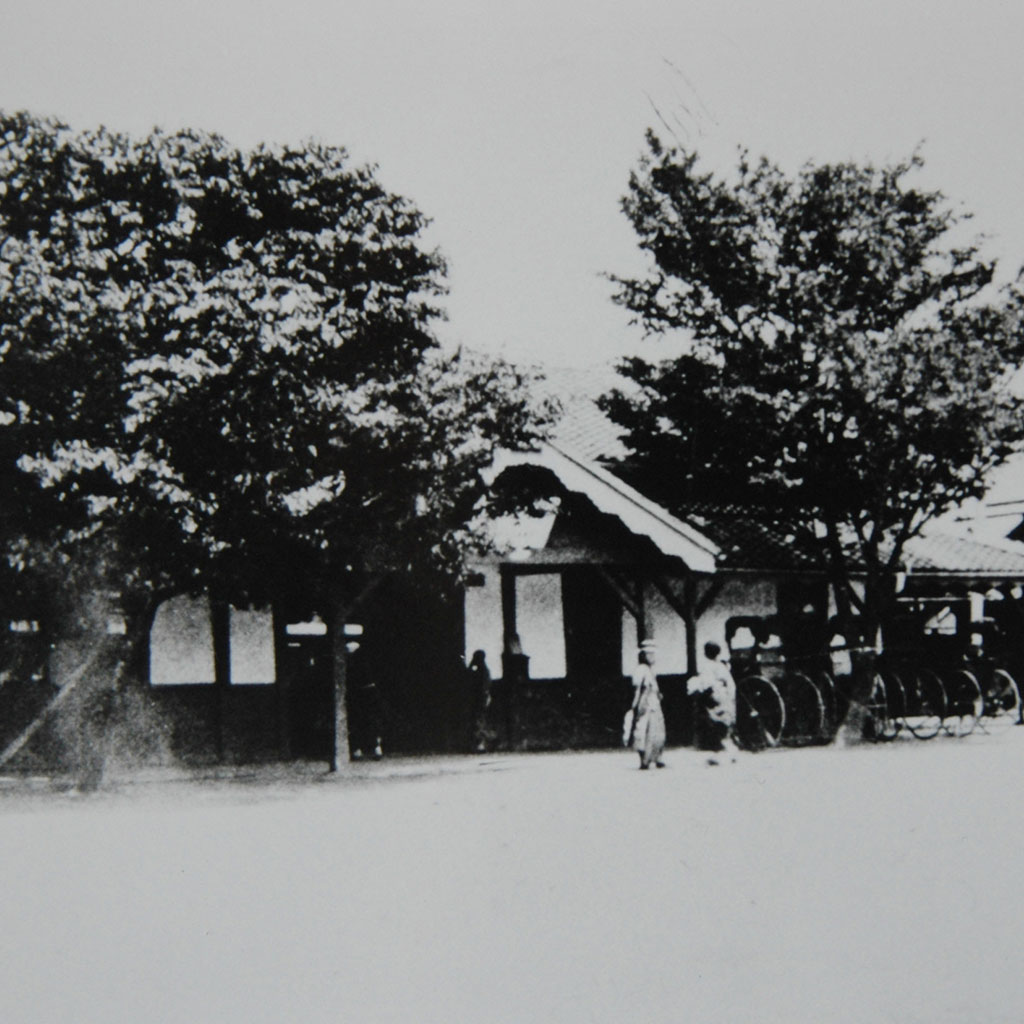 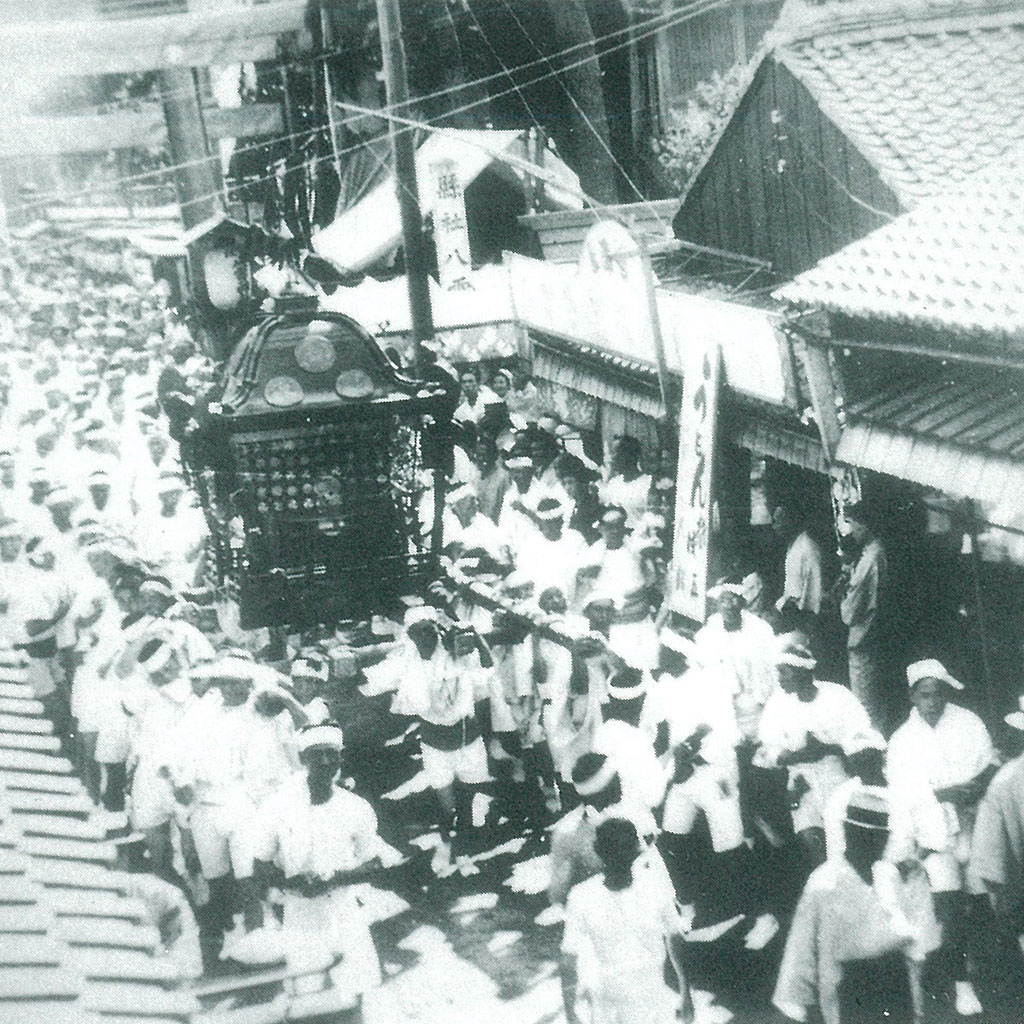 Yagumo Shrine was relocated from Matsugashima by the warlord Gamo Ujisato. It has a history of being shrined by Kyoto Gion Shrine (Now: Yasaka Shrine). It has been famous in the local area as a shrine for the Gion Festival, where brave and magnificent portable shrines are carried. Yasujiro described this festival in the essay with the title “The Gion Festival” when he was in the 6th year of elementary school. 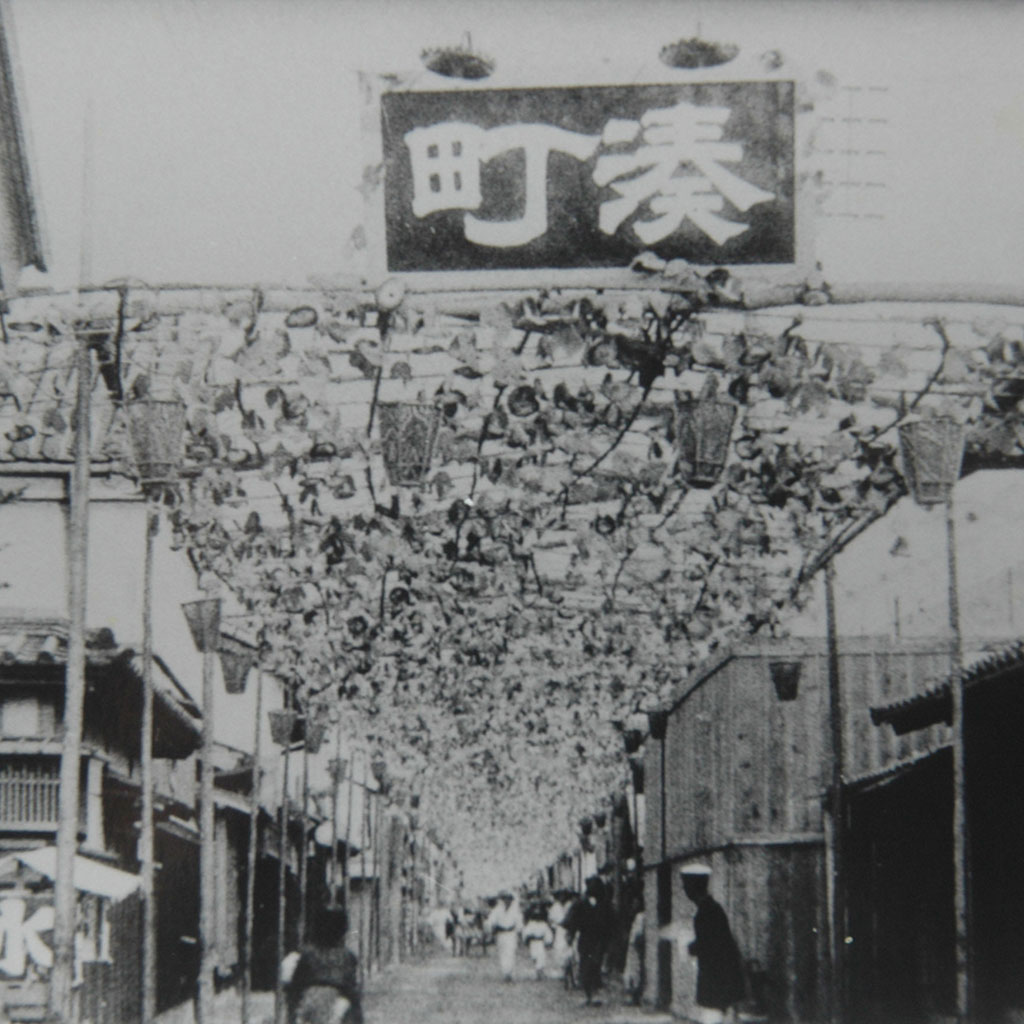 This area is called “Minato-machi” because merchants were invited from Ise Ominato while Matsusaka Castle was built. The main house of the wealthy merchant Nagai was at this corner. On the map of 1920 you can see Ota Bookstore, where Yasujiro bought his diary. After Yasujiro’s aunt Fumi married the son of Nagai and came to this town, this street became more familiar to him. 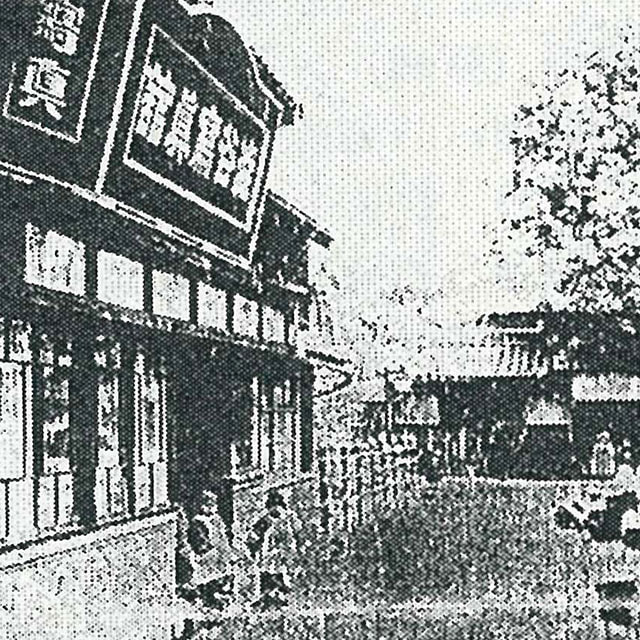 Oshiroi-machi is the town where many of Yasujiroʼs local friends lived. He often went to restaurants with them. His family doctor also lived there. The above photo shows Yasujiro with his friends in elementary school. He wrote in his diary on January 5, 1918, “Since we canʼt meet in the third term, we will gather at Shibuyaʼs house.” This photo was probably taken in the Photo Studio Shibuya, the owner of which was the father of Yasujiroʼs friend. 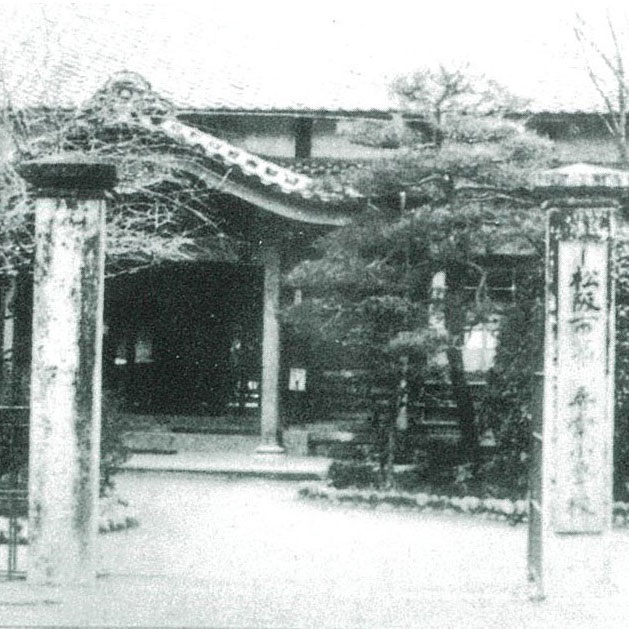 Since his family moved to Matsusaka, Yasujiro was transferred to the 4th year of Daini Jinjo Elementary School. He wrote in his diary on January 1, 1918, “... There was a first-pitch ceremony in the afternoon at Kanbe School (Now: Daigo Elementary School) because the windows of Daini School sometimes get broken. There were no balls, so we went to Inuiʼs house and played Karuta (a Japanese card game)...” Yasujiro must have enjoyed his school days, playing with his friends. 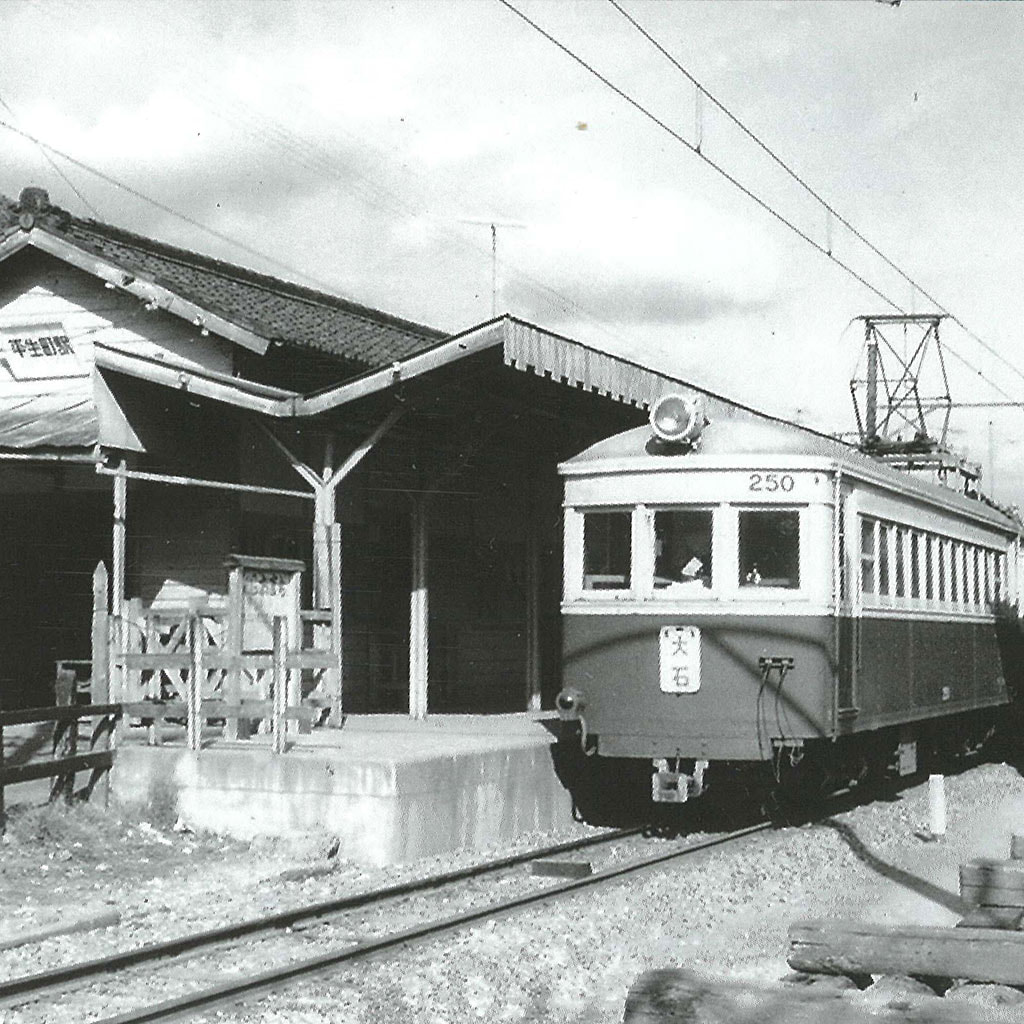 The station of Keibin Railways (Later became Matsusaka Railways) in Hirao-machi. Since it was the nearest station from Yasujiroʼs house, he often used this station when he went to Okuchi Beach and went to Miyamae area when he was a substitute teacher. Naka-za Theater was run by the father of his classmate Hasegawa. According to his diary in 1921, he often visited it with his friends. 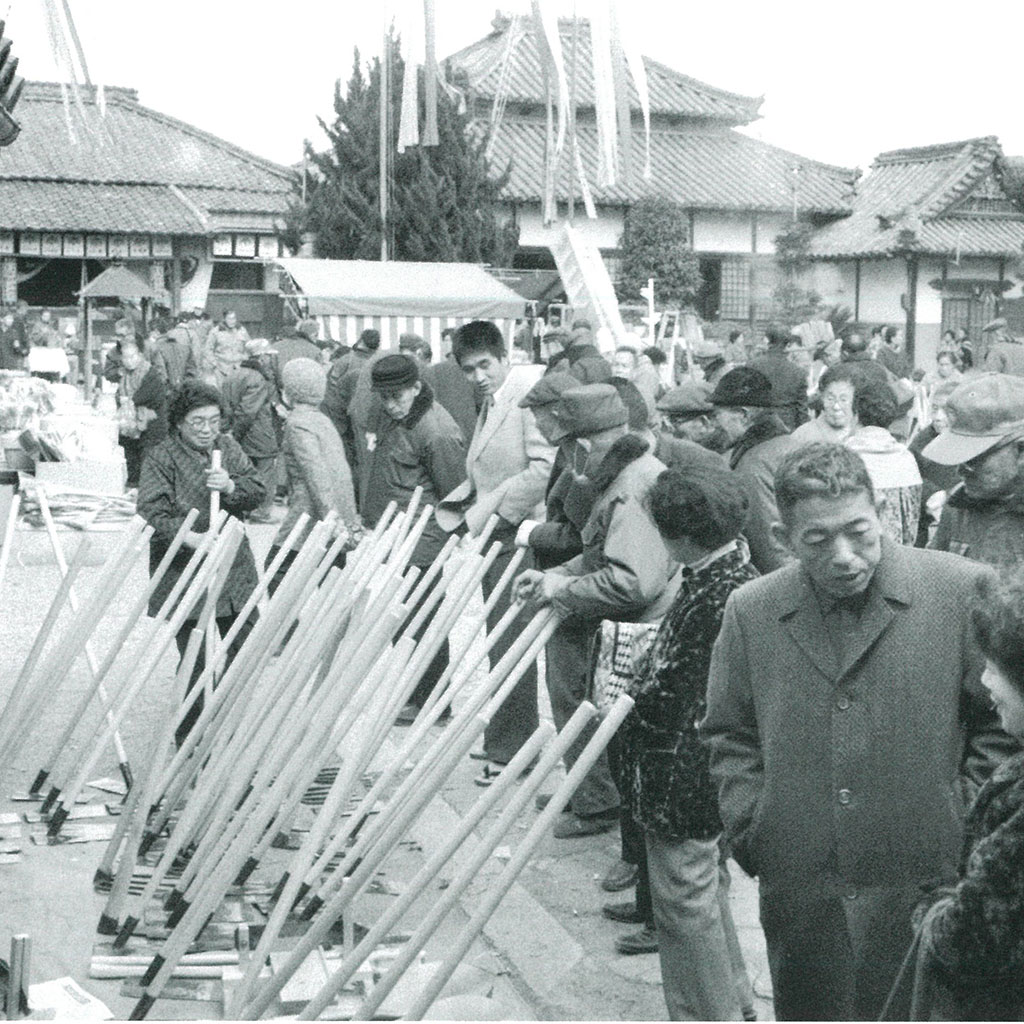 Atagosan Ryusen-ji Temple is a place of prayer for fire protection, business prosperity and good match. It is affectionately called “Atago-san”. “Hatsu Atago Festival” has continued since the Edo period. Fire protection ritual, fire walking and Atago fair are held in January. As it was close to his house and Kagura-za Theater, Yasujiro often visited there. He wrote in his diary in 1921, “If you don’t have a bath in your house, you can go to the public bath near Atagosan. One person for two cents.” You can imagine the bustle of the town around this temple. 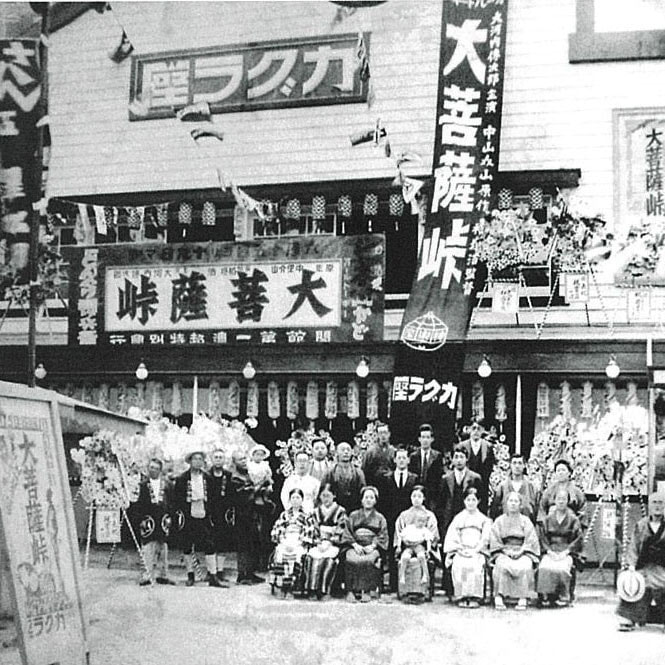 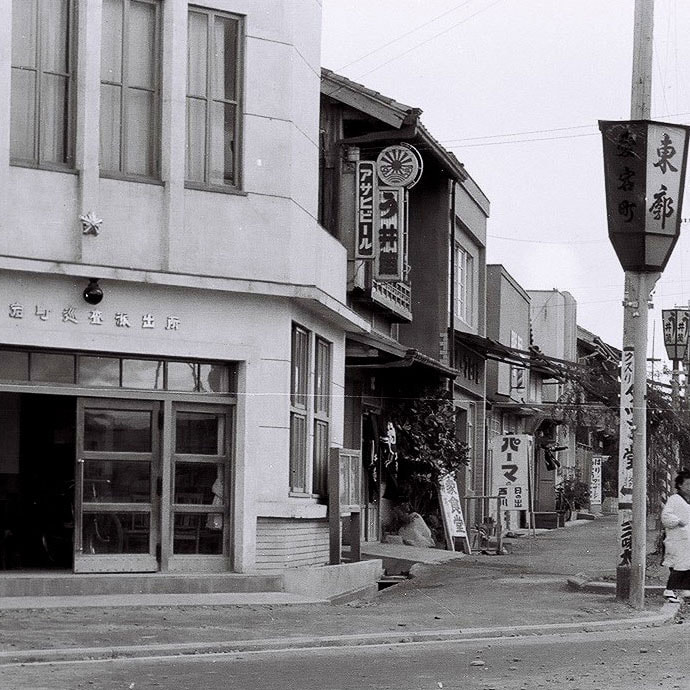 Many receipts were found in the Ozu familyʼs warehouse, and among them were the receipts of eel rice bowls given by the nearby eel restaurant “Izutsu” and Matsusaka beef restaurant “Wadakin”. There was a receipt with the date of his birth (December 12). Yasujiro and his family must have enjoyed eating eel rice bowls on his birthday. 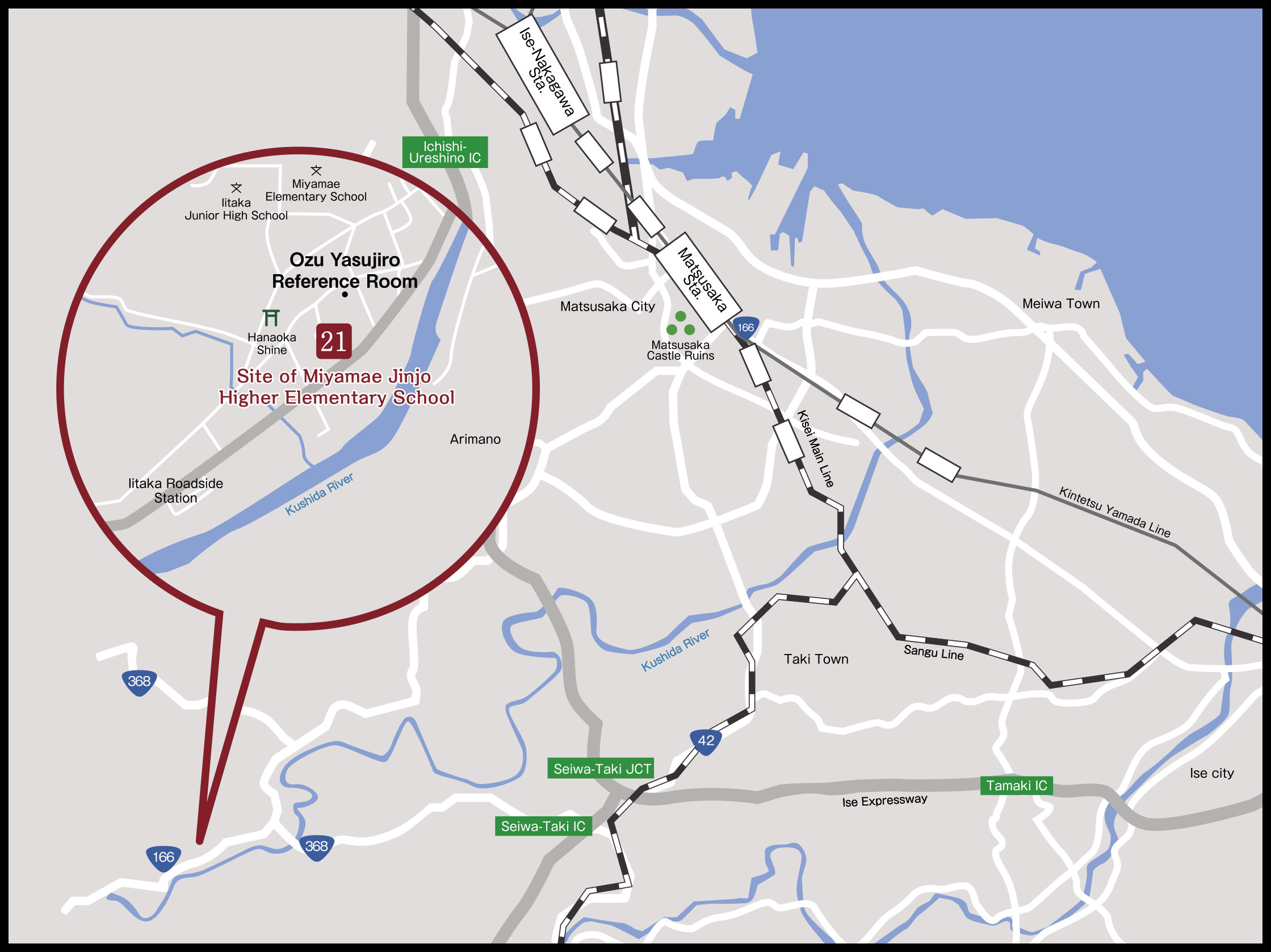 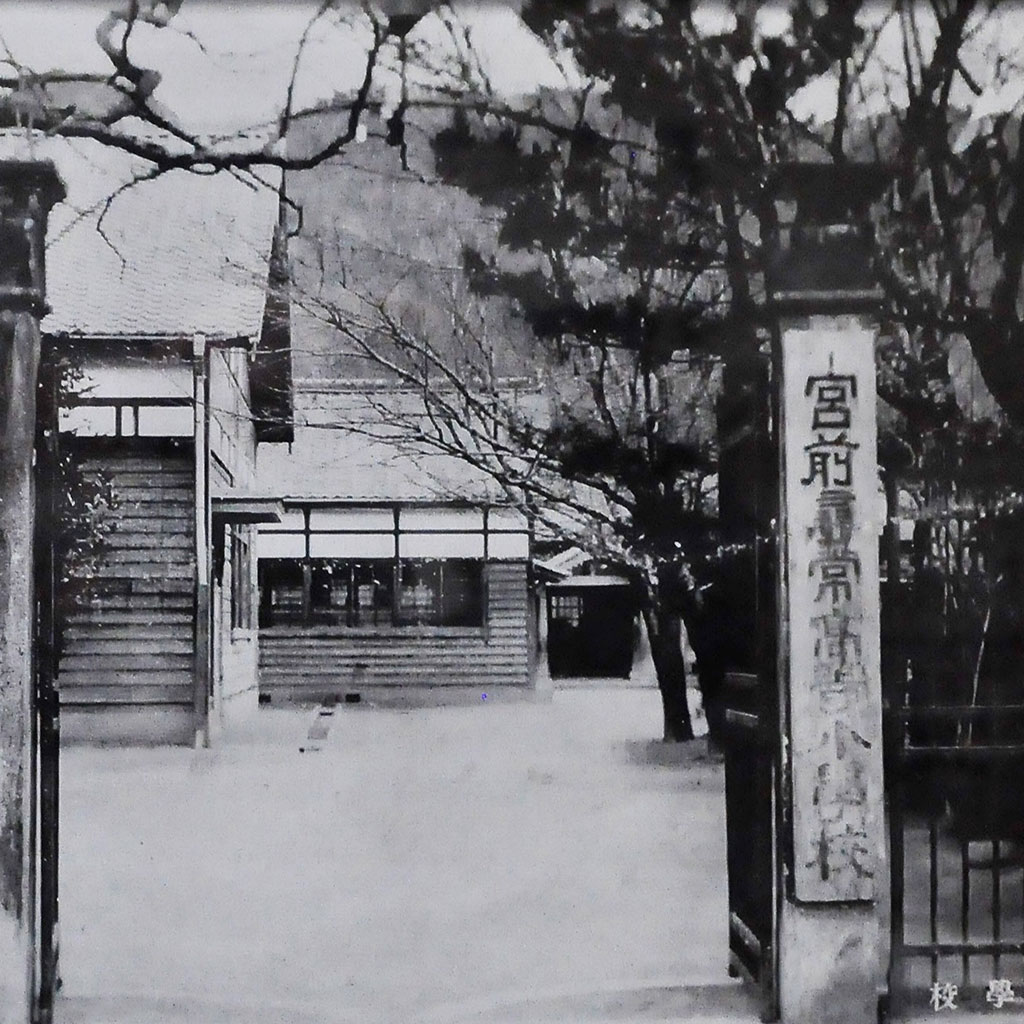 This is an elementary school where Yasujiro worked for as a substitute teacher for one year.Now The Ozu Yasujiro Reference Room is there. Students affectionately referred to him “Oozu Sensei (Mr. Oozu)”, which was a local dialect. Miyamae District prospered as a post town on the Wakayama Road. The shrines and boarding houses in the memory of his students still remain as they were. * Please contact Ozu Yasujiro Reference Room for his memorial places in the Miyamae area. (TEL:0598-46-1315)

（2F of Matsusaka City Museum of
History and Folklore）

A variety of exhibits and photos
show the history and roots of Yasujiro.

Ozu Yasujiro is famous as a movie director not only in Japan but also all over the world. He was born in Fukagawa District of Tokyo in 1903. Later he moved to Matsusaka because his father wanted him to grow up in the countryside in a good environment. He spent his youth (9-19 years old) in Matsusaka.
During the Taisho period (1912-1926), Matsusaka was busy with brilliant culture and art. Although it was forbidden by the school rules, Yasujiro went to Kagura-za Theater and watched a lot of movies, which greatly influenced his later life as a movie director.
In those days, he often visited Iinan District Library (Now: Matsusaka City Museum of History and Folklore). Therefore the exhibition room on the 2nd floor is called “Ozu Yasujiro Memorial Museum of Matsusaka”.

（2F of Matsusaka City Museum of
History and Folklore）

A variety of exhibits and photos
show the history and roots of Yasujiro.

Ozu Yasujiro is famous as a movie director not only in Japan but also all over the world. He was born in Fukagawa District of Tokyo in 1903. Later he moved to Matsusaka because his father wanted him to grow up in the countryside in a good environment. He spent his youth (9-19 years old) in Matsusaka.
During the Taisho period (1912-1926), Matsusaka was busy with brilliant culture and art. Although it was forbidden by the school rules, Yasujiro went to Kagura-za Theater and watched a lot of movies, which greatly influenced his later life as a movie director.
In those days, he often visited Iinan District Library (Now: Matsusaka City Museum of History and Folklore). Therefore the exhibition room on the 2nd floor is called “Ozu Yasujiro Memorial Museum of Matsusaka”. 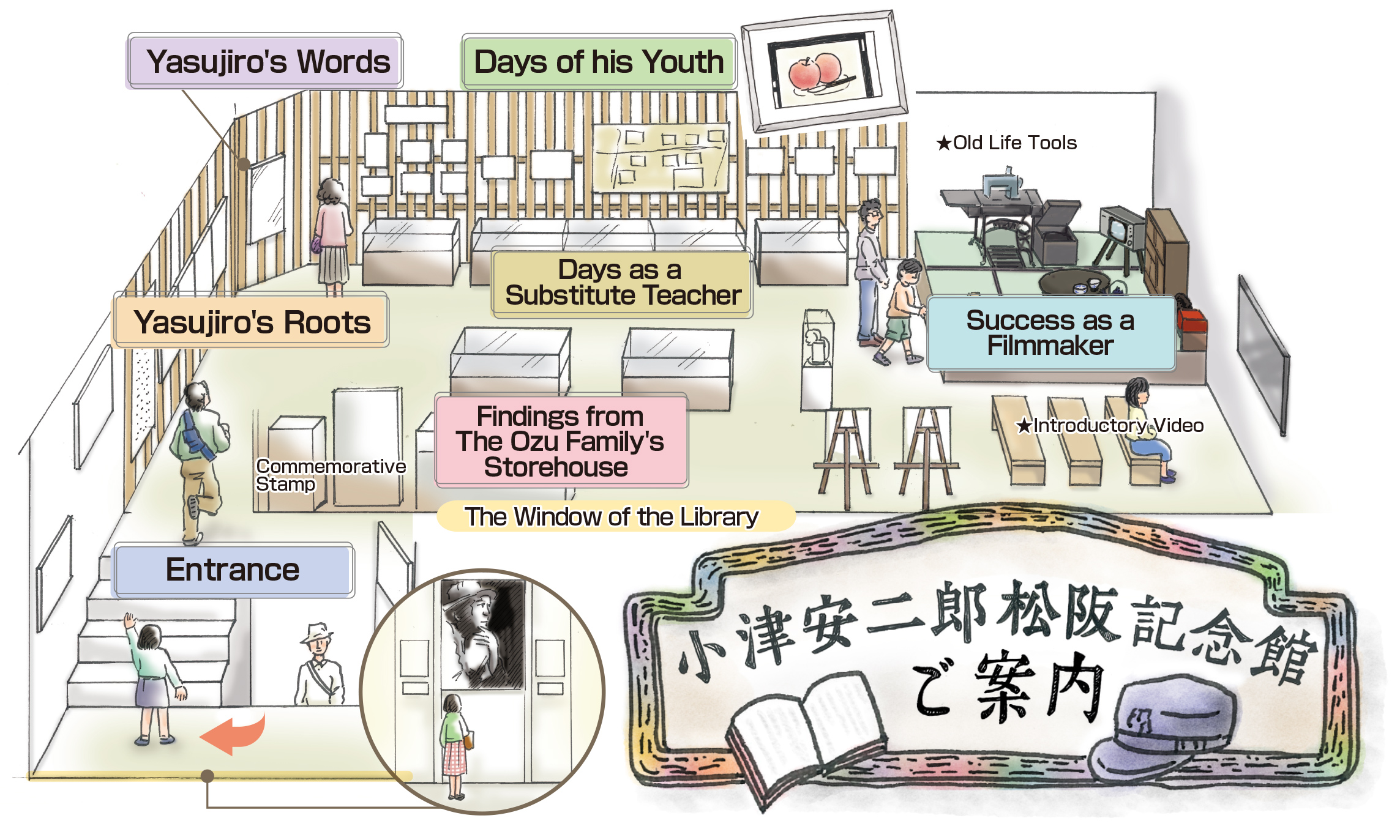 （2F of Matsusaka City Museum of History and Folklore） 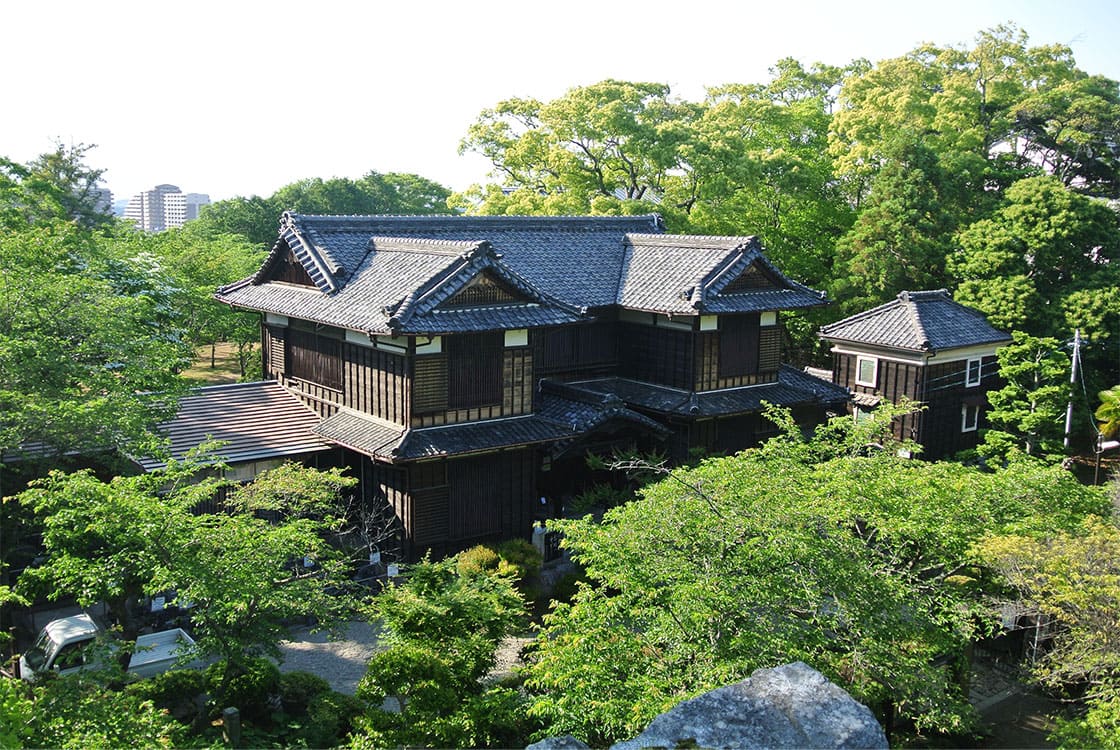